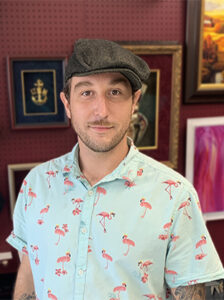 Branden is a Florida native and has lived in Sarasota since 2011. His passion for animals lead him to the holistic pet industry which he was involved in for eight years. He has worked at Gulf Gate Frame Center as a framer for the last several years. He is a full time employee. His eye for color and detail is impeccable and he has always worked with people, making him the perfect candidate for the framing industry and a guiding hand for our clients.  In his off time, Branden is heavily involved in performance art and historical re-enactment. Recently, he earned the spot as a Combat Director for the Sarasota Medieval Fair’s ‘Human Combat Chess match’.